As the CEO and co-founder of CCA Global Partners, Howard Brodsky wears many different hats. Among them is former Chairman of the National Judging Committee for North American Entrepreneur of the Year Program, member of the Entrepreneurial Hall of Fame and member of the National Cooperative Hall of Fame. As an active philanthropist, Howard is very involved, not only in the Manchester community, but beyond, as a leader in the global cooperative world. 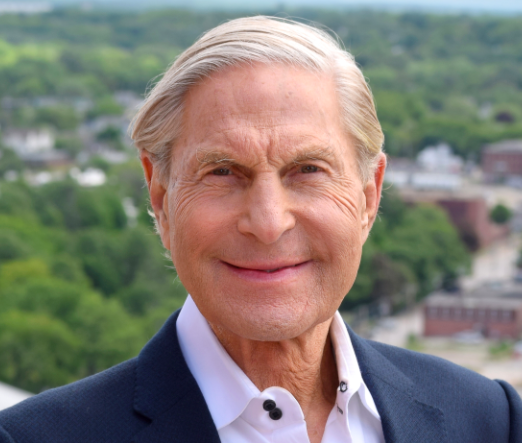 Known for his work as a visionary social entrepreneur, Howard was asked to deliver the Class of 2021 Commencement Address at the University of New Hampshire Manchester on Memorial Day weekend.

In his speech, Howard reminisced on his own college days which were full of unexpected twists and turns. He advised the graduates to go forth into the world seeking change and braced to weather the risk.

Howard shared his thoughts on the four main characteristics that one must possess to be a successful leader. These included: wanting to change the world, tolerance for risk, never-ending motivation, and delivering the unexpected.

Emphasizing the importance of using the unexpected to your advantage, Howard cited many examples of entrepreneurs who went on to build successful careers by being imaginative and delivering an experience no one had thought of before. He spoke of Howard Schultz from Starbucks, Reid Hoffman from LinkedIn and Michael Dell, the founder of Dell.

“The last characteristic, which I think is so applicable to all our lives, is that they knew how to deliver the unexpected,” Howard explained. “When we do something unexpected, it's actually neuroscience or neuro-marketing […] It releases dopamine, when somebody does something totally unexpected for us […] It gives us this unbelievable feeling of pleasure, and of warmth, and a connection to that person or to that organization.”

For Howard, the class of 2021 isn’t just unique in its drive to be leaders, but also for successfully completing their studies in the midst of challenges brought on by the pandemic.

“This class has been through a year like none ever. Everyone in the class had to deal with issues and challenges whether it was childcare, remote learning, Covid testing and more,” Howard explained. “There was enormous pressure no one ever experienced before in their lives. In some ways, they were graduating from college and from Covid simultaneously.”

He surmises that the most challenging issue for the graduates going forward is entering a workforce that is forever changing.

“It’s a time when some of the old rules are changing. Remote work is common place, new skills are required and they need to be more flexible,” Howard said. “Yet there’s more opportunity now more than ever. It’s a world of paradox. Most opportunities with most difficulties.”

At the end of his speech, Howard called back up the Class of 2021 student speaker Rafaela Tonne, an immigrant graduating with her biological sciences degree. He then presented her with a check for $3,000, saying that she embodies the tenacity and spirit of doing the unexpected.

Howard, himself, received an honorary degree from the University of New Hampshire for his leadership and inspiration in the Manchester community and beyond. His degree of Humane Letters was bestowed on behalf of the Board of Trustees for his commitment to making the world a better place.

He left the students with a last bit of advice: show your gratitude for others with thoughtful, unexpected follow-ups, because when you go that extra mile, people remember you.

“When you do something unexpected people can't wait to tell that story. So if you're going into business and you have customers, if you have a coworker, you know you could write a beautiful, a beautiful recommendation on LinkedIn for that person,” Howard advised. “If somebody has helped you or touched your life that you write a note or give them a book that's meaningful. Those are the things that people remember in life. Those are the things the unexpected things that people aren't doing that resonate with them, and make an imprint.”